Judge's Park sometimes takes in animals that require special care and despite all efforts, pass away.  We have known many special, wonderful animals over the years that touch our hearts and sadden us with their passing.  This page keeps alive their memory...we do it for you guys...

Joe and Jimmy: not adoptable 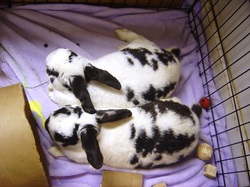 *Medical special needs
*Bonded pair
*Neutered brothers
*About 7.5 pounds each
-Jimmy and Joe are a super sweet pair of neutered brothers.  They are perfectly house trained boys who love living in their puppy pen with their comfy blankets.  You see, these boys came from a man who developed Alzheimer's disease and forgot how to take care of them.  They were tunneling in their own feces it got so bad.  And because of it, they now have permanent lung issues which means sometimes they have to take antibiotics which they love!  Jimmy loves attention and snuggles and has super cute half loppy ears, while Joe is a little more reserved but can be just as sweet when he knows you. These boys have been here for a year and a half and have become sanctuary bunnies, meaning we will care for them the rest of their lives here.  Jimmy recently developed a very bad facial abscess which has gone into his bone, and we have made the decision to hospice him here until he is ready to leave the Earth.  Joe will be devastated we know, but it really is for the best for him.  They have suffered so much in their lives before they came here, and we want to keep them as happy as possible and remove all pain and sadness from their lives.  We are taking sponsorship donations for these boys.

In 6/2017, Joe passed away and ended an era that lasted 7 years.  We will miss our boys terribly. 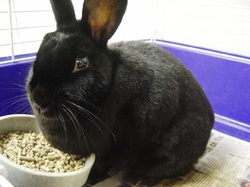 This is Lucky's story, as related "by him" before he passed away: "Hi! My name is Dirt. Well, at least that's what my old owners used to call me. The new people here say I'm Lucky to be here, so that's my new name! You see, my old parents decided that I was too much trouble. They'd gotten me as an Easter present 7 years ago, and recently I'd gotten sick. I was missing my litter box, and they didn't bother to clean it up. My rear end was always wet, and I started developing burns from all the urine. I also had loads of poo building up on my underside. It hurt so bad, and they didn't understand why I wouldn't just "shape up" and use my litter box. I also was twisting hay around my ankles, because I was turning in circles trying to get away from the pain. And it didn't help that I was living on a wire bottom. Oh my feet hurt so badly. Apparently they tried to turn me loose and left me outside for a few days. But I just "wouldn't go away" as they said. It was too scary. I had only known one thing my whole life and I couldn't just survive outside. I wouldn't have lasted very long. Because I wouldn't go away, they tried to call a vet to get me put to sleep so they didn't have to deal with me anymore. But I'm Lucky they called that vet, because a wonderful person working there called a local rabbit rescue, Judge's Park who took me in. My old parents had a nice car, and nice clothes, and they couldn't even bother to take me to the vet to find out what was wrong with me. Luckily my new home will do that and I'll feel so much better! They already have me on soft bedding and towels to help soothe my rear end, and they gave me a "butt bath" which will help me feel better. And they took away the squirrel food that my old owners had been feeding me and gave me yummy hay and healthy pellets. I have some fly strike, and I'm skinny, and these urine burns will need to be healed. Can I finally really find a place to live out my days with a soft blanket, good food, a clean cage and some love. All I want is to be held like a baby and have my face rubbed and be kissed all day."

I was blessed to have every day that I had with Lucky.  All he wanted was love and he was trying to make up for those last 7 years of not being loved by being the most affectionate, sweet, tolerant baby.  We spoiled him and kept him happy and healthy and comfortable no matter what that involved.  I just wish we had found him earlier and then he would've gotten the love he always deserved. Lucky was only with us for a few months before the abuse from his old owners took it's toll and we had to do the best thing for him which was let him go.  Lucky will always be with us.  His ashes sit in his favorite soft bed at the rescue, where he can always watch over us and the animals. 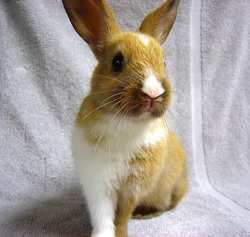 Sabrina came to us from a horrible pet store in Boardman OH.  This pet store exemplifies everything we are working against.  "Mass produced" unhealthy animals with a staff who couldn't care less how they are cared for and don't know anything about the animals they are selling.  With the millions of dogs, cats, rabbits, and other small animals in shelters today, all places like this should be put out of business...

Sabrina was being housed with guinea pigs and other larger adult rabbits.  During her time there she had been repeatedly attacked without intervention from the employees.  She was 7 weeks at most and was covered in untreated bite wounds. We took her in and began treating her, focusing on the very large bite that had turned into an abscess on her side.  Despite much treatment and love, Sabrina passed away during abscess surgery.  She is the reason we battle against pet stores and breeders and hope that someday, animals like her will not be kept in horrific places being sold to whomever will take them.  She is our "logo" bunny, and we think it is very fitting... 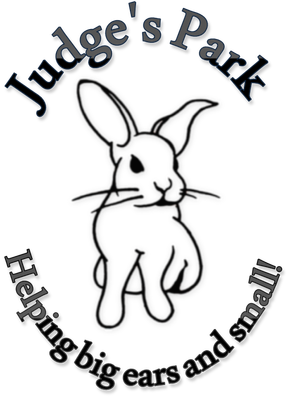 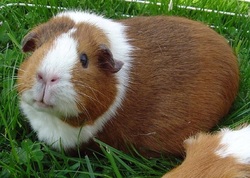 April the guinea pig was surrendered to us at an old age.  She had spent her entire life being bred over and over and over again (she lived with a male) and having litter after litter.  She was dumped because they didn't want them anymore and we were glad to take them and give them a better life.  April became a "sanctuary" pig.  She never left us because her advanced age and health problems from living an unhealthy and neglected life.  She gave birth to one baby boy after her arrival and never had any babies again.  She was finally able to retire and live the life she should have had.  She was an angel and loved to give nose kisses and be held.  She lived to the ripe old age of 8 and passed away in her sleep.

She is the poster child of why we don't believe in breeding.  Having litter after litter had taxed her body and organs beyond belief.  She wasn't happy, she was emaciated as the babies had always drained her of her extra nutrients, and she was just plain tired.  No animal deserves a life like that.  We were able to spoil her for her last few years, and she never wanted for anything ever again. 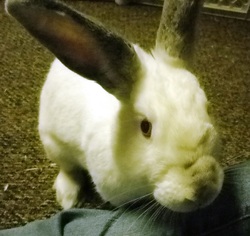 -Tabitha came to us as a rescue from a kill shelter and had been bounced around a lot before she came to us.  Tabitha came so far while she was with us.  She'd gone from being a girl who would run all over her cage in fear to get away from my hands if I tried to pet her or handle her, and try and bite me when cornered, to a girl who completely accepted me and begged for attention. She trusted me so much and had learned through us that people could love her and that she could love people.  She reminded me of one of my favorite bunnies we adopted, Cleo who was fiesty but fiercely loyal to me till the end.   Unfortunately one day, Tabitha developed diarrhea, we think from ingesting something bad (unsure what) that killed her within hours.  We did everything we could, but she waited till I got home from work and died in my arms.  I miss her so much and can't believe she is gone.  I considered her my bunny though she was up for adoption, and I had been debating whether I could even let her go with how far we had gone together.  She made the decision for me.  In my heart, she has been adopted by me, and will always be with me. 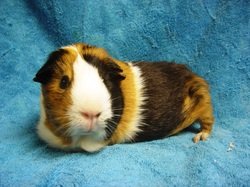 -This beautiful girl was surrendered to us because her owners couldn't afford her vet care.  Lily had some sort of massive tumor or cyst on her rear end that was causing her a lot of problems.  She had surgery to remove the mass on 8/16.    She is one of the sweetest piggies we've ever had the pleasure of having here.  She loves attention, she loves being held, she loves giving and getting kisses, she is just a complete joy and we want her to have the best life ever.  We are not sure whether her mass will come back, so she will live out the rest of her life here.
Update 10/2012:  Lily's problems eventually overtook her and she passed away peacefully in my arms.  Even as she grew weaker, she was able to lick the tears from my nose.  I miss her and her unconditional love, despite what she went through.  We will always miss you baby...