The following pets are sponsored, meaning their adoption fees have already been paid for.  They are either special needs or have been at the rescue longer than others waiting for their furever homes.

*Precious is one of our featured adoptables and her adoption fee has been sponsored!**
​
**Precious is located in foster in Pittsburgh**
*female cat
*black and white shorthair
*Approximately 1-2 years old
-Precious came into our rescue over the summer. We were trying to trap a cat to tnr and we caught her in the middle of the night! She was very scared but we knew she wasn’t feral. She’s been in foster and we think it’s time for her to find her furever home. Per her foster, “She is a sweet girl who still needs to learn to trust people, but has come along way. She will need someone who understands that she may never be a lap cat, but is patient enough to show her that she can be. She would do well with another friendly cat but no kids or dogs.” She is shy and sometimes hisses but allows you to pet her. She would need to be kept in a smaller area at first and then given more room as she is used to her new home. She is spayed, negative for FIV/Felv, FVRCP and rabies vaccinated, microchipped, dewormed, and on flea preventative. She will be adopted to an indoor only home and the adopter will sign a contract that she cannot be declawed. Interested adopters can fill out our adoption application here: https://www.judgespark.org/adoption-application.html. Adoption fee is $50 for a single cat which includes all the vetting above. 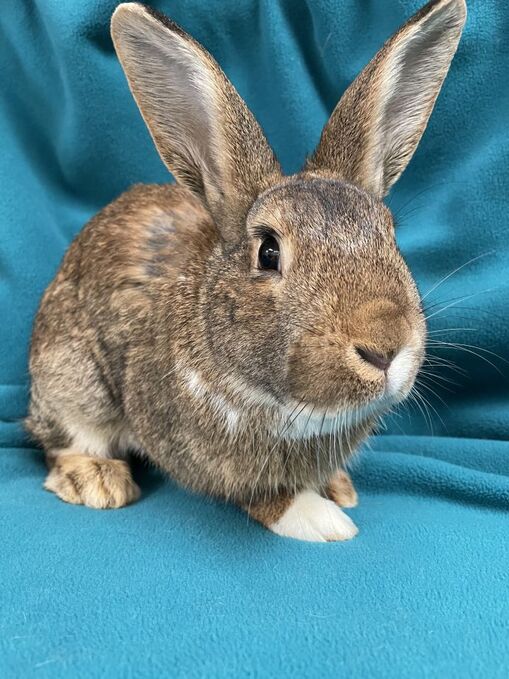 *Jeden is one of our featured adoptables and his adoption fee has been sponsored!**
​
Breed: Some sort of dwarf mix
Size: About 4 lbs
DOB: Approximately 10 months old as of February 2021
Reason in Rescue: well that’s a long story. Our amazing vet contacted us because someone has brought in a severely injured rabbit and didn’t want to pay for surgery to fix him because, “he was a $15 rabbit and wasn’t very friendly.” They wanted to euthanize him but my vet knew he had a much better option, us. He was surrendered to us and we paid for his $350 surgery. He is now ready to find his real furever home!
Personality: His old owners obviously never took the time to work with him and get to know him.  He has been so happy to be indoors and loved and spoiled and is relishing the attention he is receiving. Jeden can be very nervous at first and you have to build his trust with you.  Once he trusts you, he loves being petted and held, but you do have to go slow.  He's never been able to truly trust anyone so this is a new experience for him.  He gets anxious around other animals, not surprisingly, so we think he would do better in a home by himself.   He would prefer a home without a lot of craziness and small children.  He has also been very good with his litter box!
Friends: The reason he was injured was because his old owners allowed two unneutered males to be together, they fought and his underside and testicles were ripped open. He is very anxious around other animals, which is understandable.
Requirements: Must be adopted as an indoor animal, with an as large as possible plastic bottomed cage or puppy pen (minimum 4' x 2'). Adoption process: An adoption application must be filled out (http://www.judgespark.org/adoption-application.html), and approved by us. Then we will arrange a meeting time to see the animal of interest. A home visit is required prior to adoption. Suggested adoption donation is $60 which includes his neuter and microchip.

*Ella is one of our featured adoptables and her adoption fee has been sponsored!**

Breed: Californian
Size: About 5 lb female
DOB: Approximately 9 months to 1 year old
Reason in Rescue: this group of buns came from a neglected group of buns. These buns were living in filthy, disgusting conditions to just be bred to produce babies. We took in four of them.
Personality: Ella is a sweet, albeit very scared little girl. I don’t think she’s had much positive handling in her life and is flinchy about being petted initially. But once you start petting her she melts. She loves her face rubbed and really seems to melt when she gets comfortable. She just needs someone who can go slow with her and give her all the love and let her learn about the good life. She is very recently spayed so still learning about her litter box but doing well. We’ve already seen her flop a few times since being here. She’s so happy to be in a clean, healthy environment with plenty of food and water! We don’t recommend any of these buns going to an environment with children as they are nervous and will be until they get used to being spoiled indoor house buns!
Friends: she is a good candidate to be bonded to a neutered male, but not until the earliest May as she needs to heal from her spay and get rid of any excess hormones.
Requirements: Must be adopted as an indoor animal, with an as large as possible plastic bottomed cage or puppy pen (minimum 4' x 2'). Adoption process: An adoption application must be filled out (http://www.judgespark.org/adoption-application.html), and approved by us. Then we will arrange a meeting time to see the animal of interest. A home visit is required prior to adoption. Suggested adoption donation is $70 which includes her spay and microchip.